Create an MMO empire in a PVP war by battling kingdoms and fighting enemies with strategy. 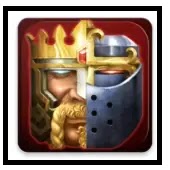 Clash of Kings : New Crescent Civilization – ideal for Android users who are interested in military strategies In the game, you will fight for the throne and lead your own Empire. The created Empire will be comprised of seven kingdoms that will be required to continuously build and defend against attacking enemies.

Both actions take place in real time, adding to the game’s dynamism. Aside from clashes, there is a mechanism of cooperation with the people and involvement in the growth of the Empire’s internal policy. Fans to compete in the wealth and strength of the game’s real players Clash of Kings : New Crescent Civilization there’s multiplayer.

The wars are still going on. The call came from CoK land to the descendants of the old King. The palace gate is about to open. The new mysterious seas await the true lord.

Rally the troops, demonstrate your strength to the other Kingdoms, and rule the sea!

In this epic multiplayer online RPG, you can battle kingdoms, wage war, combat armies, create your castle, and conquer an empire using real-time strategy. Clash of Kings is an exciting war game that immerses you in the CoK fantasy world of PVP mediaeval battle action.

In the massive PVP online game, battle other lords and wage war. Battle for kingdom supremacy, raise an army, and fortify your defences with upgrades to your fortress, palace, dragons, and army barracks to withstand even the most effective PVE assault.

Play real-time strategy to consolidate control of your kingdoms, upgrade your equipment, and engage in an epic MMO war to protect your castle from an enemy assault. Build farms and sawmills to gain capital for your army and to upgrade your palace. Create and establish strategic partnerships with other leaders to your benefit.

Send dragons on a quest to bring back gifts for your kingdom, use tactical MMO RPG gameplay to escape a siege on your palace, battle enemies, and manage your palace’s resources to become one of the empire’s most powerful lords in Clash of Kings.

Explore the emerging Dragon-born, Viking, Yamato, and Huaxia cultures as they conquer all new territories. With new heroes battling it out in the ancient valley, each with their own specialties, these battle-tested warriors are ready for intense combat action within the ever-expanding multiplayer fantasy universe.

Download Clash of Kings, compete in the Popularity function for top billing, and take control of the realm in this epic MMO PVP fight!

Connect with Clash of Kings!

Among Us Innersloth LLC
New